Budapest stag is one of the most popular event in Central Europe, try this fantastic party weekend and you’ll have an unforgettable memory.

Have you thought about where to hold your bachelor party in the coming years? Are you the best man and don’t know what to do?
You are in the best place! 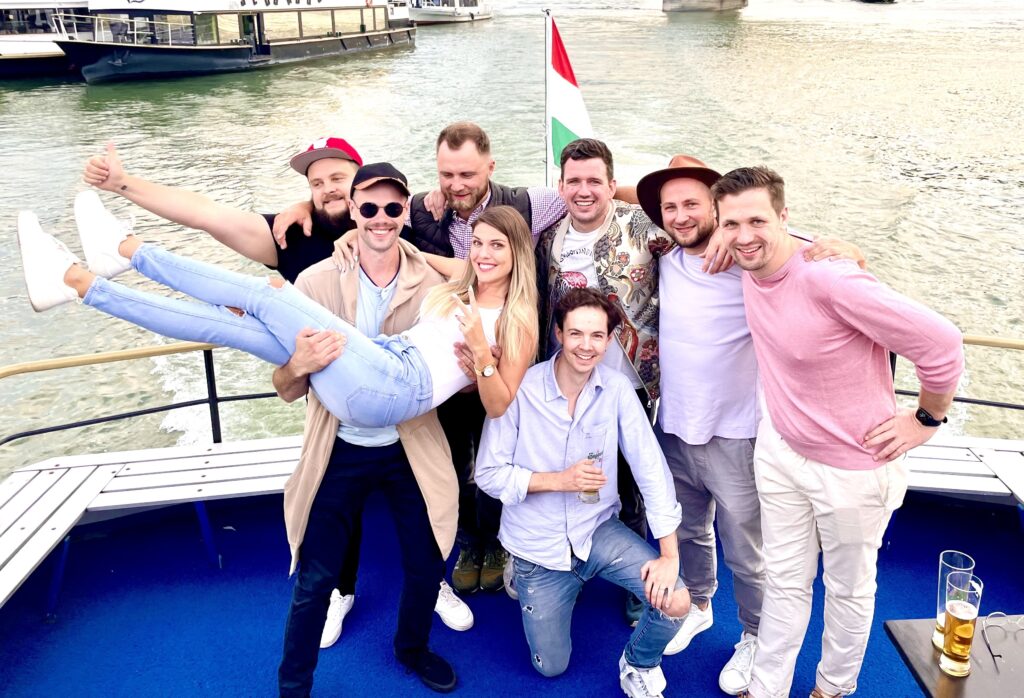 The concept of bachelor parties has been very popular for a long time in the Anglo-Saxon world. The French were not familiar with it until a company launched the French-speaking market about ten years ago. Fresh out of an oldschool G set up Stag VIP in 2016, the first familiar stag do company specializing in the organization of bachelor parties for boys and girls. It makes the Hungarian capital its starting point.

Since then, Budapest has become one of the main destinations for stag do parties. For example, the English event company The Stag VIP Group has been around for 14 years but has been offering Hungary for 7 years. The low cost flights that have developed recently have made it an easily accessible place for the weekend: it is especially for 4/5 years that bachelor parties have been booming here. Central Europe, almost unknown, fascinates the West.

This new 72-hour party tourism is now a full-fledged business in the city. Specialized companies and customers are drawn to Budapest as much for its cheap booze, ideal for bar hopping, as for its sexy image, ideal for strip club hopping. Who says cheap erotic says 80% bachelor parties for 20% girl parties. The girls generally prefer Barcelona, Amsterdam or Rome. Here, a pint is 900 forints, or €2,5. “If you go out to London and you drink a lot, it can cost you more than coming here,” notes Gergely Olt, doctoral student in sociology at Loránd Eötvös University and specialist in the 7th arrondissement and ruin bars. 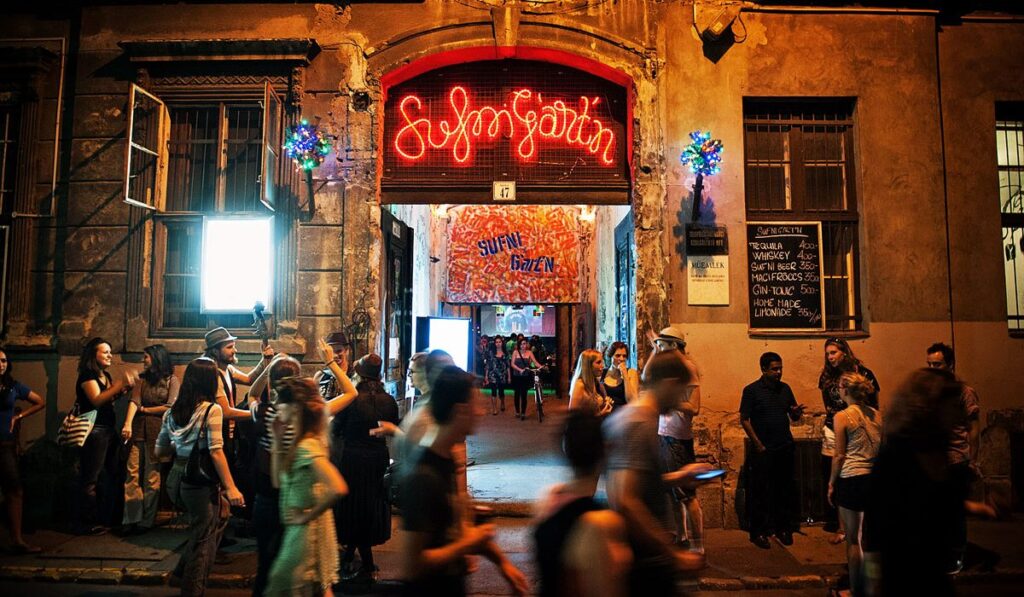 Budapest is safer than Belgrade or Bucharest

Here, there is no red light district like in Amsterdam. But the large number of bars in the 7th arrondissement make it a suitable place. There are about 400, where stag parties, Erasmus students, Hungarians and tourists rub shoulders. The urban transformation continues today with the creation of poor quality bars whose turnover is based on bachelor parties. “These new bars are not looking to build customer loyalty, they just want to sell alcohol,” notes the sociologist. Paul confirms that “some Hungarians are nostalgic for the night ten years ago. There were fewer parties but they were better.” 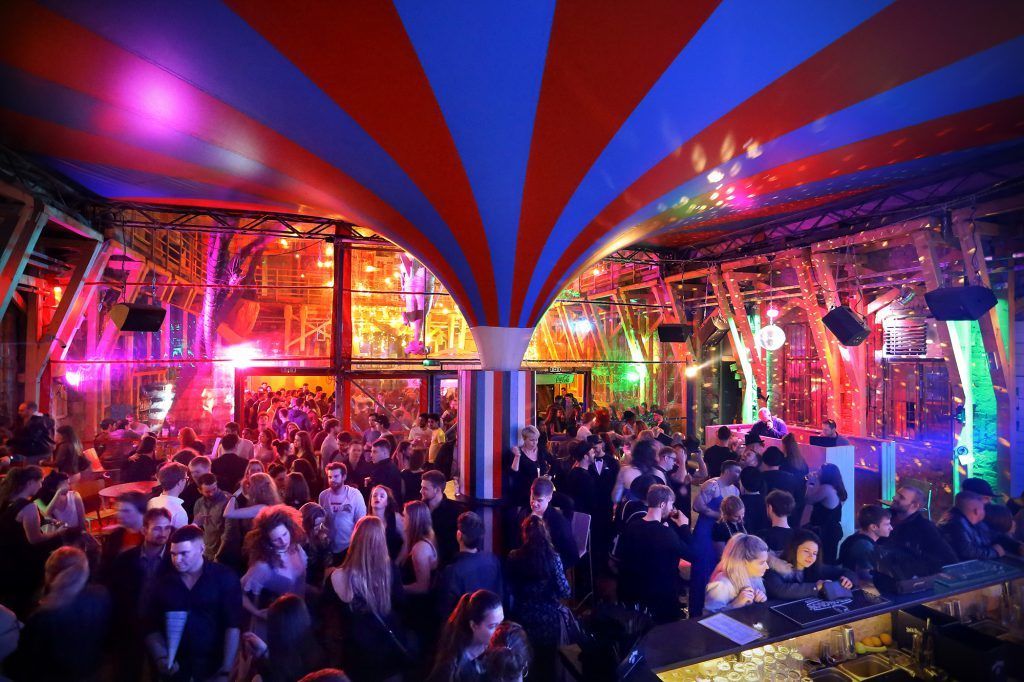 Also outside the bars in the party district of Budapest

On the streets of Budapest, groups taking part in stag do activities offered by their entertainment agency are commonplace. You just have to go out for lunch to meet them. After rushing into the Burger King toilets, the happy Brits get back on board their Party Bus parked in front of Ötkert, one of the biggest nightclubs in the city. This machine, a big party bus where you drink beer while partying, is one of the best  daytime or nightlife activities. Disguised, they are around 25 years old and cover American pop in the background with their cries of joy. Two hours later, same place, same scene, this time it’s girls dressed up as fairies chaining bottles of wine. Motorists who cross their path had better be patient. Pedestrians are rather indifferent. 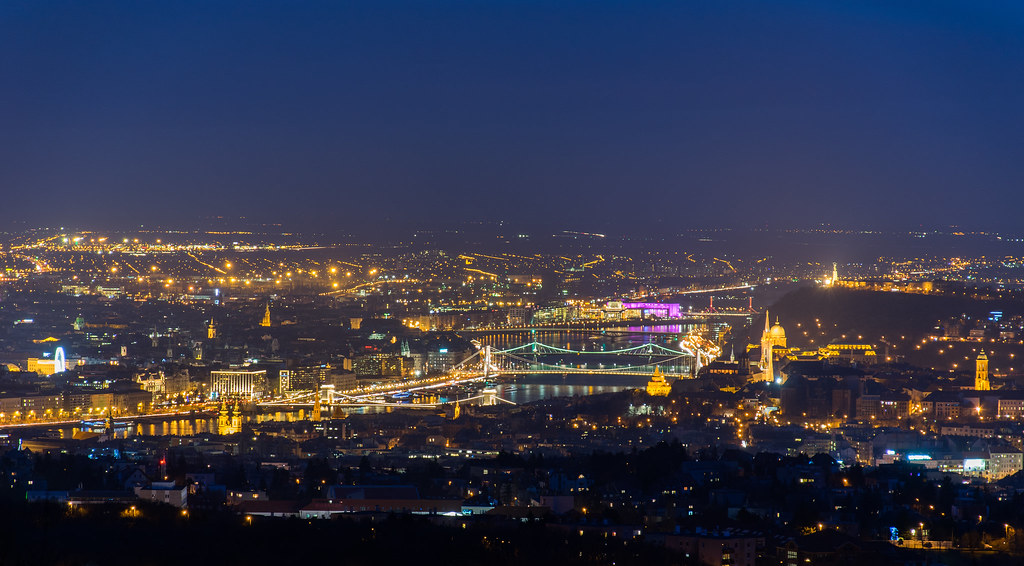 Here is a report from one of our dear stag guest

On the heights of Budapest, the bunker transformed into a shooting range immerses you directly in a spy film. All the ingredients are there: perimeter wall, barbed wire, long dark tunnel… Add the bursts of Kalashnikov fire and the two giants with shaved heads who welcome you, all you have to do is take yourself for James Bond. “Do you think we’ll get out of here alive? says Matt, 27, an anesthesiologist from Essex who rushes inside the blockhouse.

With his sixteen friends, he came to celebrate, for a weekend, his stag do in the Hungarian capital. Decked out in Tyrolean overalls, the future groom does not lead off in front of such large calibers. Glock pistol or AK-47, the Russian assault rifle, now is the time to make the powder speak. “We are not at all fascinated by weapons, specifies Charles, the witness of the groom. No one has ever shot before today. But as in England, it is very regulated, it was easier to try here. “There is such firepower, it is impressive. 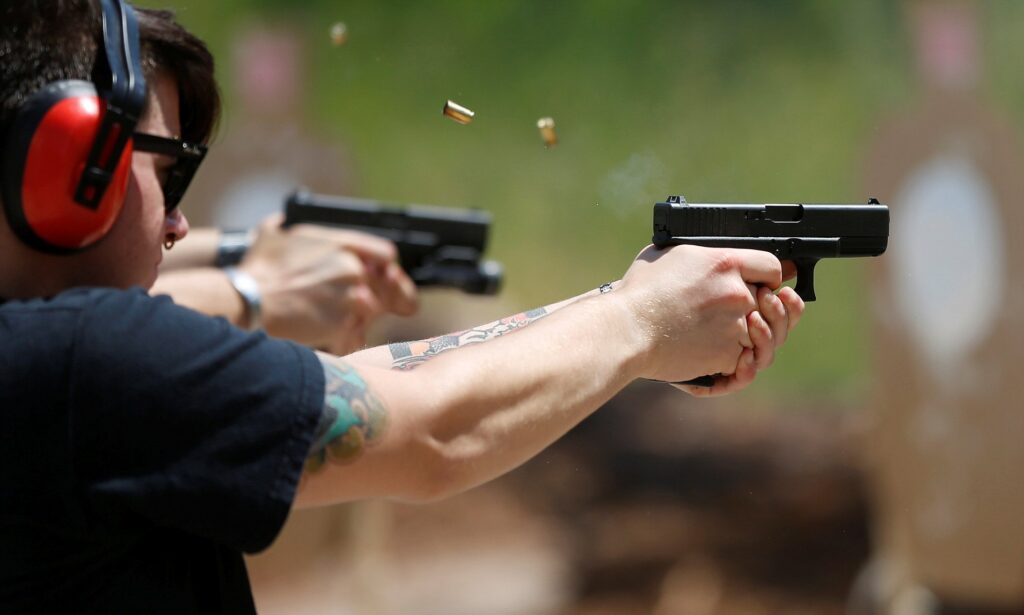 Tomorrow, we risk having aches, “joke some, far from imagining what the Hungarian nights have in store for them. Attracted by the promise of parties until dawn, by cheap alcohol and by the charms of its inhabitants, more and more English people are choosing Central Europe to bury their bachelor life. Budapest but also Prague, Bratislava, these destinations see the arrival, every weekend from May to August, of engaged couples ready to scour bars and nightclubs.

The english are rather charming, she admits. Sometimes, some engaged couples do not hesitate to flirt, mistakenly thinking that Hungarian women are easy girls. But why are they doing this when they are going to get married? asks the young woman. Night falls on Budapest. It will be short, intoxicating and extravagant. Straight out of a rap clip, the largest Hummer limousine in the world (16 meters long) parades through the streets of Budapest, music blasting. On board, the French boast, a glass of champagne in hand, calling out to dumbfounded passers-by. “It’s absolutely insane. 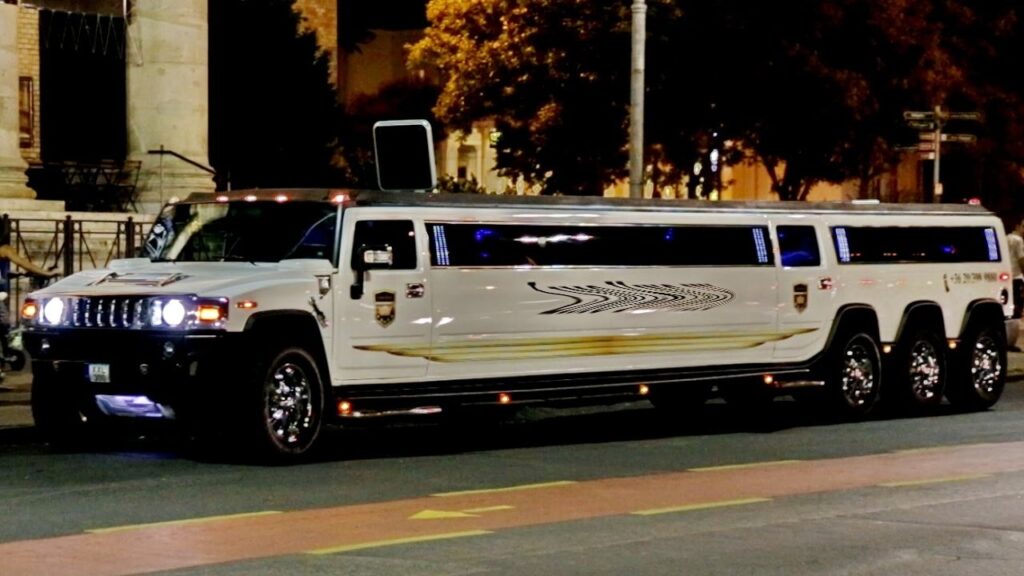 I never imagined I would do this one day! », exclaims Matt again, who will suddenly see a luscious « hitchhiker », whose charms, the dexterity of a masseuse and the extreme flexibility will melt the whole gang. “A striptease at a bachelor party? It’s mandatory, it’s like a tradition,” remarks Charles. In Nancy, meanwhile, Jack, 25, would like to know how her future husband behaves: “I am a little worried because I know his friends and what they are capable of doing. But it’s okay, I trust him. The only instructions I had given him was not to come back tattooed and to text me to tell me that everything was fine.

“Word kept. It’s nearly 1 o’clock in the morning. The limo stops in front of a nightclub. Everyone goes down. “How about we have a last drink? proposes Matt, intoxicated by the evening. The party is far from over…

A trend largely inspired by the American comedy Very Bad Trip. “It has become a real fashion phenomenon, says Peter, founder of Stag VIP Budapest, a company specializing in Budapest stag parties. In three years, the number of groups we sent to party to the best places in Budapest has increased tenfold. Budapest is Famous for its cruises on the Danube and for its dental tourism (one hundred and thirty thousand English people in total each year), Hungary has also made its nights a paradise for merry ramblers. 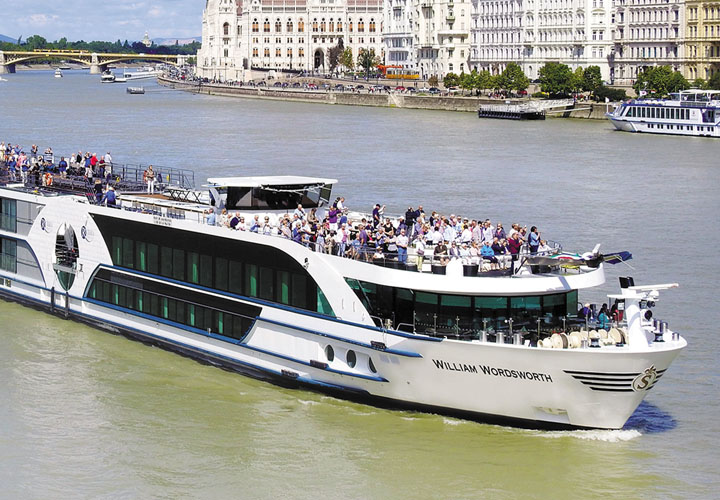 Between decadent parties, striptease clubs and flowing beer, Budapest is “right now the European capital of the night, adds Peter. Last year, we took care of more than two thousand five hundred people. From 200 euros per person [without flights and accommodation], everything is possible: shooting sessions, relaxation in the baths, drunken evenings or limousine rides, even a dwarf hire there is something for everyone. 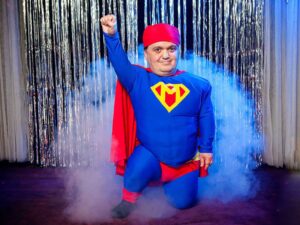 As for the strip clubs that we recommend to groups, we made sure beforehand that there was no prostitution to avoid slippage, ”he specifies. That afternoon, the sun beat down hard on the Széchenyi thermal baths, among the best known in Budapest. Lying on his towel, Matt rewinds the film of his evening.

The glazed look due among other things to the rounds of Russian Standards, a famous vodka, the young man has forgotten nothing of his escapade on the Danube, unlimited wine included, nor of the VIP square of this disco shared with his best friends. or the stripping of this blonde in the plush lounges of a private club. Chantilly cream spread over her body as a bonus. “I didn’t expect to go through all that,” he said. The surprise is total.

I’m getting married in September, and having all my friends reunited with me before my nuptials is awesome. We only do one Budapest stag, it would have been a shame to miss it, ”he confesses. If the excesses of the day before have left their mark on some, there is no question of spoiling the atmosphere. By the pool, it’s beer for everyone and schoolboy jokes. “It had been months since we had seen each other, with Matt, admits Brian, 27, a high school friend. We all left with the intention of raving together and making the most of the activities. 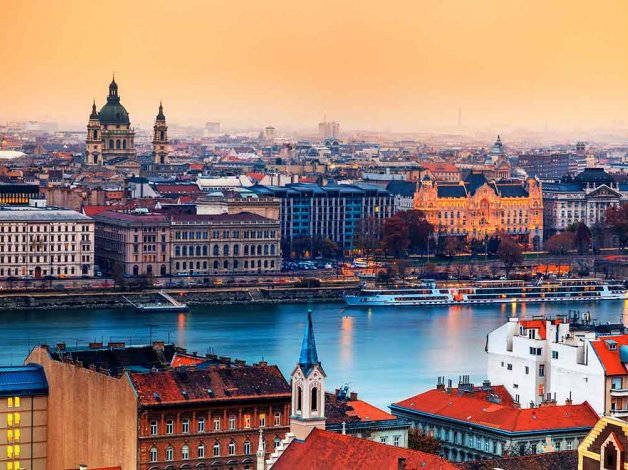 Intern in cardiology in Nancy, Marc, 25, wiped the benches of the faculty of medicine with the future groom. This stay “between guys” and “without our girlfriends”, he would not have missed it for anything in the world: “I work between 70 and 80 hours a week. It was an opportunity to decompress, release the pressure of the hospital and have fun. It’s a real bubble of oxygen,” he explains. “But be careful, corrects Charles, we don’t want any amalgamation.

We came to Budapest for the reputation of the bars and the parties, not for the girls. Besides, we’re all a couple. However, according to Eva, their English-speaking guide, some groups would not be so wise and would give in to temptation.

BUDAPEST STAG ON THE HIGHEST LEVEL